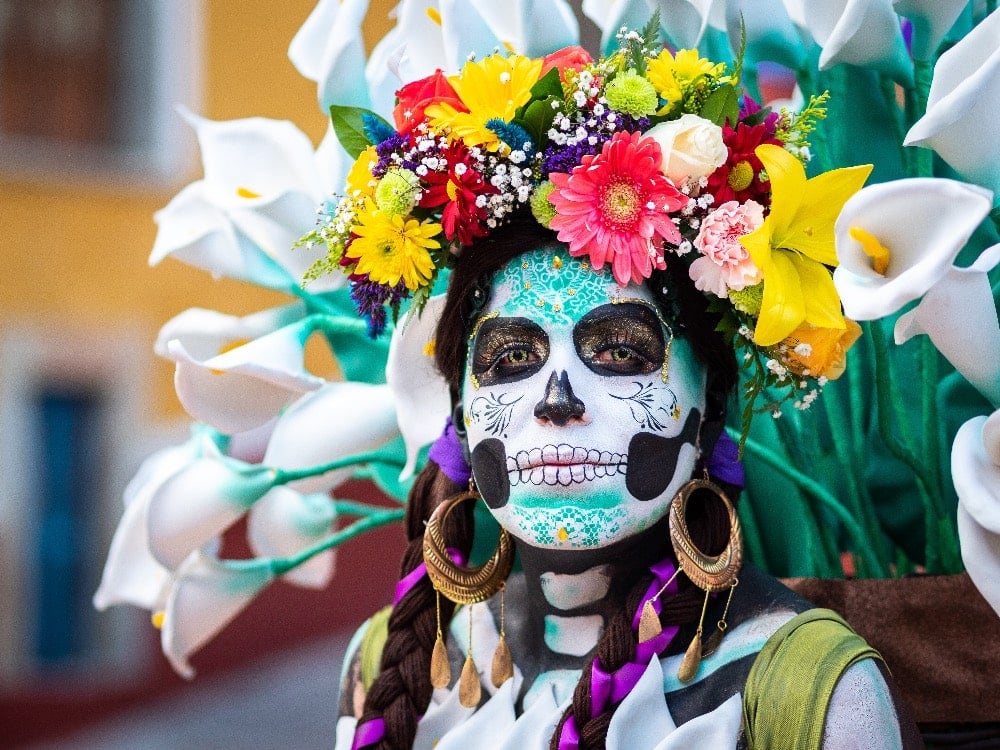 What is Day of the Dead?

Mexicans love to celebrate, it’s a fact. They find every possible occasion to celebrate and have a party! When a public holiday falls on a weekend, they move the celebration to the next working day, which I’m sure you’ll agree is genius! There are quite a few public holidays in Mexico but one of the most celebrated and heartfelt is the Day of the Dead or Dia de los Muertos (day of the dead in Spanish).

In this blog we explore more about the Day of the Dead history, how it’s celebrated, and the best places to go and see the celebration. For those of you interested in the traditional foods that are eaten and culinary customs that bring this special celebration to life, we include those too.

When Is The Day Of The Dead

Day of the Dead is celebrated every year from the 31st October to the 2nd November.

What Is Day Of The Dead In Spanish

Day of the Dead History

The Mexican Day of the Dead festival blends ancient traditions, catholic religion and an interesting history that goes back before the Spaniards invaded the region. Celebrating Day of the Dead dates back to the time of the Mayans and Aztecs. They believed that death is not something to mourn because it’s part of the natural course of life. On the contrary, mourning the dead is a sign of disrespect. Therefore, the Day of the Dead is an occasion of joy and happiness. It is a celebration of ancestors coming back to the living world to visit and get together with their family.

When is Day of the Dead?

Day of the Little Angels/All Saint’s Day starts the festival off where the spirits of children that have passed away spend 24hrs with their parents and loved ones. The altars are decorated with the child’s favourite toys and snacks.

All Souls’ Day is dedicated to spirits of deceased adults. It’s adult-themed and filled with laughter, joy, tequila, parades, dance, games and cemetery visits. Local bands play, memories are shared, and everyone dresses up as skeletons.

In the pre-Hispanic era it was common practice to conserve the skulls and show them off as trophies. It was a symbol of death and renaissance. The celebration took place on the ninth month of the Aztecan calendar around the beginning of August. It lasted the entire month!

The Spanish conquerors, who put all their effort to convert the indigenous population to Catholicism, moved the festivities to the beginning of November. This was so that they matched with the catholic celebration of All Saints and All Souls. The real essence of the ancient rituals never disappeared though.

Day of the Dead Traditions

The pre-hispanic civilisations believed that the soul is immortal. After the physical death it continues its journey in the underworld where it needs tools and food. That’s why food and decorative objects play such an important role. However, the most representative element of the Day of the Dead holiday in Mexico is the altar with its offerings. These were mainly food and special desserts that are prepared only at this time of year. Everything has a special meaning though, and it’s a representation of the Mexican vision of death, and full of allegories.

In places with a stronger tradition, they begin placing and decorating altars on October 28th. They reach their maximum splendour on November 2nd. Often on the first day they light a candle and place a white flower. The next day another candle is added and a glass of water offered. By day 3, they light a new candle, place another glass of water and some white bread. The next day the seasonal fruit appears (tangerine, guava, orange, apple, tejocote). For 1st November it’s the sweet food, the chocolate, the pumpkin in tacha, and the flowers are placed. On the main day they place the favourite food of the deceased, along with tequila, mezcal and beer.

You will find, or more accurately smell, the copal (an incense made from tree resin and burned to draw in the spirits). It really enhances the spiritual atmosphere.

The most traditional of these Day of the Dead traditions is the seven-level altar. It represents the levels that the soul must go through in order to reach the place of its utmost enlightenment and spiritual stage. They cover each step with tablecloths, confetti, banana leaves, palm kernels and “papel picado” (a squared sheet of paper cut in a decorative way and comes in different bright colours). Each step of the altar has a different meaning as well.

Day of the Dead Food

Food is incredibly important during the Day of the Dead. This is because the dishes are prepared in honour of loved ones that have passed, quite often that person’s favourite food (and drink) that they enjoyed while they were alive. They have an opportunity to enjoy it again with their family for the day! Normally a variety of dishes are all served at the same time in the middle of the table for everyone to share. Food is also placed on alters too, which is not consumed by the living, but meant for the spirits of the beloved deceased who will be visiting.

Here we’ve gathered some of our recipes that are typically lovingly prepared during this cultural celebration.

Mole is one of the most important dishes whipped up during special occasions and festivities in Mexico, such as Day of the Dead. It’s a traditional Mexican sauce, that is usually poured over meat, and is made from dried chillies, nuts, warm spices, raisins, other sweet fruits and tomato. For our Chicken Mole recipe, we have paired it with chicken breasts and our Mexican Rice recipe, and the mole contains our Gran Luchito Chipotle Paste to give a smoky and sweet taste.

Tamales are a key food for Day of the Dead in Mexico. They are small steamed packages made of cornhusks (or banana leaves) filled with a tasty corn paste and various meats or beans and cheese. This is our tamales recipe for tamal de rojo, where we also use our signature Gran Luchito Chipotle Paste to cook the beef and make it into delicious and succulent meat, ready to go into the tamales.

Another typical dish that comes out during the annual festivity. The most popular way that the Mexicans prepare stuffed peppers for Day of the Dead is to batter and fry them. A beautiful chipotle, tomato, garlic, and onion sauce is then made to compliment the mozzarella stuffed peppers. We’ve used poblano peppers as they have a unique and mildly spicy taste, and their size makes them perfect for stuffing!

The significance of having Pozole at the Day of the Dead festival goes way back! It originated with the Aztecs and other indigenous tribes in Mesoamerica. Historical texts state that the pozole of the Natives was made with sacrificed human flesh, and it was eaten on special occasions. Yummy! After the Spanish arrived and cannibalism was banned, the human flesh was replaced with pork. Our recipe for Pozole Soup is divine, and no human flesh in sight, promise!

This slow-roasted pork dish is another favourite dish for the festivities that the ancient Mayan civilization used to cook for their deceased relatives. The pork is usually marinated with bitter oranges, spices, and annatto seeds that are used to give the vibrant burnt orange colour to this dish. Have it in tacos, like we like to do at Gran Luchito!

Our typical Mexican Rice recipe is a great side dish to many of these recipes mentioned above that you can have on the table for Day of the Dead. The fact that it’s orange is great too (symbolising the sun and the warmth of life)! It’s so much better than the microwaveable rice you find in a packet. If you’re looking for flavourful rice, then definitely give this recipe a try.

Looking for another way to have your beans for your feast? Look no further. Here at Gran Luchito, we have done all the work that cooking Mexican black beans from scratch requires. Our lovely Gran Luchito Cantina Beans (authentic black beans with their juices) are waiting for you to warm up and serve along with your main course. It’s as simple as that. All you need to do is to garnish them with some lovely colour such as finely chopped onion, tomatoes, chillies, coriander, some scoops of avocado and dollops of creme fraiche.

Frijoles, also known as Refried Beans, are a traditional way of eating beans in Mexican cuisine. In our recipe we simmer our Gran Luchito Cantina Beans, which are black beans with onion, garlic, and Gran Luchito Chipotle Paste, then blitz until smooth. They are then topped with crispy chorizo, sour cream and coriander but are delicious with just about any topping you fancy.

Other traditional foods we had to mention that always come out for Día de los Muertos include Pan de Muerto (bread of the dead) and Day of the Dead Sugar Skulls, which are also used as offerings for the altars. Atole is a traditional non-alcoholic thick drink made of corn, cinnamon, and vanilla that also always comes out. It’s served hot and considered a comforting drink during the Day of the Dead festival.

The Day of the Dead is celebrated and very much heartfelt throughout all of Mexico. However, there are a couple of places that have become popular specifically for their Day of Dead celebrations.

In Oaxaca “The Days of the Dead” represents a mixture of tradition, worship, celebration, magic and history. It is a magnificent show that takes place in the pantheons. They adorn the main pantheon with more than 2,400 candles. Among many activities, the Altars of the Dead Contest stands out for us. Each family spectacularly decorates the tombs as a tribute and offering to their beloved ones that have left this world. The entire City of Oaxaca prepares for this meeting with the deceased. In each of the Pantheons there are activities for everyone to participate or just watch.

Pazcuaro, in the state of Michoacan, offers another incredible place to watch the Mexican Day of the Dead. Besides the pantheon decorations, here they also decorate all of the fishing boats with candles and flowers in all colours. This is quite a sight! The islands in the Pazcuaro lake, especially the Janitizio, have activities, festivals, and shows to entertain the locals and tourists. They go on all day and night from the 28th of October until November 2nd.

We hope you enjoyed reading our blog on What is Day of the Dead. Definitely a celebration you should not miss if you happen to be in Mexico during this time!

Thank you for this. Was very interesting. I’ll be sharing this link with others.