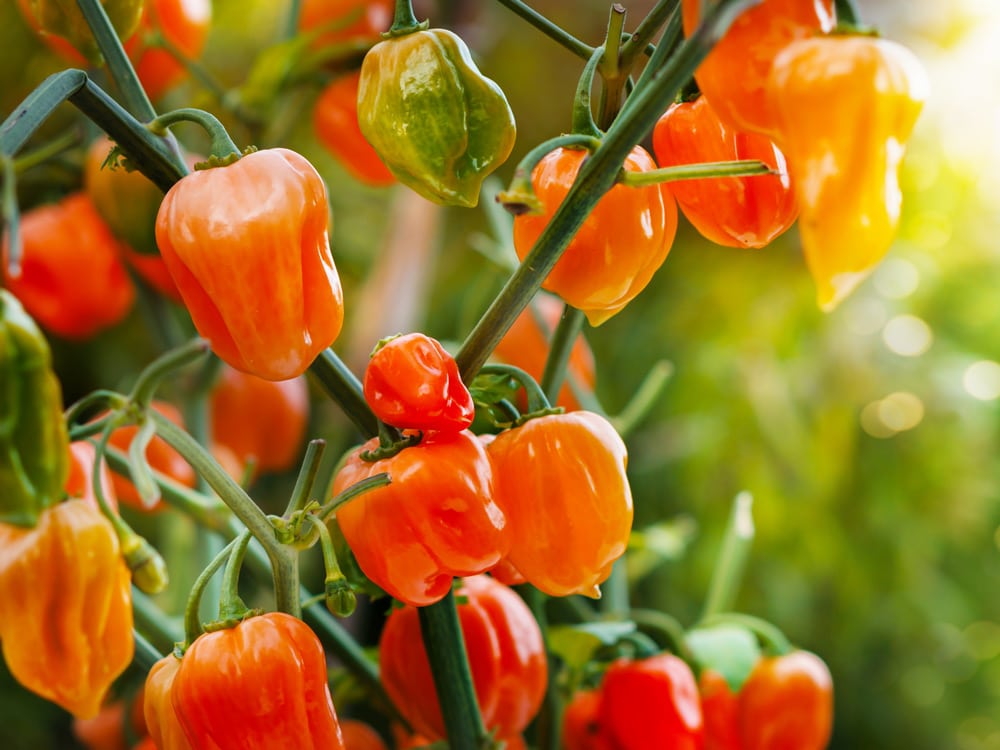 Mexican food has a reputation for being very spicy, and with good reason! Mexican chillies are a huge part of the culture in Mexico, used throughout the whole country in a mind-boggling array of ways. Regardless of which region of Mexico you travel to, you’ll find Mexican chillies in almost all of the food.

In fact, we would go as far to say that Mexican chillies are the most vital ingredient in authentic Mexican cooking. So join us on this spice crusade and discover the wonderful world of Mexican Chilli Peppers – The Gran Luchito Guide!

A chilli pepper is the fruit from a plant called Capsicum. These plants originated in Puebla and Oaxaca more than 5000 years ago, but can be found today all over the world. Mexican chilli peppers are widely used in many cuisines as a spice to add heat to dishes. You can buy them in supermarkets and vegetable stores in various shapes, sizes and colours. Mexican peppers have very little aroma, but their taste can vary between very mild to incredibly fiery and hot!

A substance called Capsaicin (slightly different spelling there to the plant) gives chillies their distinctive kick, and it can be found in the seeds, veins and skin of the chilli. There are dozens of Mexican chilli varieties. The chillies used in Mexican cooking we will go into later!

Fresh Chilli Peppers – this is the whole Mexican chilli pepper, as it comes straight from the plant

Chilli Powder – is made from ground and dried Mexican chilli varieties, and can be used instead of fresh chillies. Half a teaspoon equals about one chopped fresh chilli

Chilli Flakes – are made from dried and crushed Mexican chilli types. Again, can be used instead of fresh chillies and half a teaspoon equals about one fresh chilli

Chilli Seasoning – is made from ground and dried Mexican chilli types. They are then mixed with other herbs and spices

Dried Chillies – these have a milder smokey flavour. Rehydrate by soaking in warm water for about 20 minutes (but not longer or they can become bitter), then chop as desired.

When buying chillies used in Mexican cooking you need to choose firm, fresh and unblemished chillies. Avoid the ones with wrinkles, marks or bruises! This is because once they reach optimum ripeness they start shrivelling up. So choose the shiniest you can find!

How to preserve chillies? In terms of how to store chillies and preserving chillies, put them in a sealed plastic bag in the fridge. Keep ground chilli powder and chilli flakes in an airtight container somewhere not too hot. This is the best way of storing chillies. Can you freeze fresh chillies? Yes! They will last well for up to 6 months in the freezer, and should not be watery and mushy once thawed.

Of course you can pickle your chillies. That way they will last for a couple of months in the fridge and be perfect for snacking on or sporadically adding to meals.

How to pickle chillies?

It’s a very simple process! Here is how it’s done:

First rule, don’t drink water! It will make the burning sensation worse! Soothe a sore mouth with a cup of milk or some yoghurt. This is why yoghurt-based sauces are often served with hot curries. For a deeper look into chilli burn remedies, take a look at our blog on How To Recover From Eating Spicy Food.

Studies have shown that capsaicin, the active compound in chillies,  is high in vitamins and antioxidants which boost the immune system and minimize the damage caused by free radicals. Researchers have said that capsaicin also increases your metabolic rate, and is low in fat and carbohydrates which make it ideal diet food. If you add chillies to your meal on a regular basis, it may also help control blood glucose levels. Other apparent health benefits of capsaicin include helping to aid in the treatment of colds and flu, improving the digestion, being an ideal food for diabetic patients, and even preventing and combating cancer.

How To Use Chillies

Chillies are meant to be finely chopped when adding to cooking. Used in stir-fries they will add a burst of colour and hotness. Sprinkled into simmering dishes such as stews, bolognese or chilli con carne, they will add flavour to the dish. The longer the chilli is in the dish, the hotter the flavour will be, whereas adding it at the last minute gives the dish a more subtle heat. Compliment the chilli by also pairing it with herbs such as ginger, parsley, cumin, coriander, cinnamon and basil.

How To Slice Chillies

Use a small, sharp knife to cut the whole fresh chilli in half lengthways to expose the seeds. Remove the seeds inside if you prefer your dish not so hot. Finely chop the chillies and add however much you like to your dish, depending on your required level of heat.

Think of a jalapeño chilli as the gateway into the whole world of chillies. Extremely common in both Mexican and Tex-Mex Cooking, jalepeños can either be green, red or yellow. The difference between the colours depends on how long the chilli is allowed to ripen on the plant. Typical Tex-Mex uses would include topping them onto Nachos or stuffing them to make deep fried jalapeño peppers. In Mexico, it’s more common to find them in a tomatillo salsa or cooked and blended in oil to make a sauce to put on top of chicken tacos. Jalapeños are also used to make Chipotle Chillies. These are basically ripened jalapeño chillies that have been smoked and dried.

Check out all of our recipes that contain our delicious Jalapeño and Pineapple that you can buy from our webshop.

Whilst this fruity number is pretty hot (it’s packing between 200 and 300 scoville units), the habanero chilli pepper is also packed full of favour which just needs to be enjoyed. Grown in the Yucatán region of Mexico, typically this Mexico chilli would be used in hot sauces paired with fruit (we use it in our Mango and Habanero Salsa). Please don’t be afraid! The heat dissipates pretty quickly.

Take a look at our habanero recipes that use our hot, fresh and fruity Habanero Mango Salsa. Available to buy from our webshop!

This Mexican chilli pepper which originates from Puebla and is large and heart-shaped. They are spicy, but only mildly, and have been made famous by the Mexican dish Stuffed Poblanos. In this recipe, the fresh peppers are stuffed before being roasted. Quite commonly this would then be covered in sauce. A dried poblano is called an Ancho. These have a rich, raisin-like sweetness and are great in sauces.

Serrano peppers are also from the region of Puebla and are either eaten raw or fire-roasted. Just a couple of inches long, with a tapered end, this small pepper packs quite a bit of heat. The smaller they are, the hotter! They’re typically used in salsa and pico de gallo. This fleshy chilli can either be red or green depending on how ripe they are when they are picked. As well as Mexican, they are also common in Thai cooking.

This dried chilli pepper is one of the more common and popular chilli peppers in Mexico. Mostly grown in the Zacatecas region of central Mexico, it has a medium heat with a smoky berry flavour. These chillies used in Mexican cooking are put into soups and moles as well as being used in meat rubs such as our Guajillo and Garlic Taco Mix. Check out our Guajillo recipes and order online here!

An ancho chilli pepper is a dried poblano chilli and an extremely common chilli in Mexican cuisine. One would find these medium heat Mexican chillies (2000 scoville units) used in stable dishes such as Enchiladas, tortilla soup and more exotic dishes such as carne de puerco en chile negro (grilled pork in ancho & tomatillo sauce). There’s even a chilli liquor made out of anchos!

These super hot (100k-140kn scoville units) and tiny Mexican chillies are also known by many other names such as tepín, chiltepín, chilito, or chiapas. They are most commonly found dried but these peppers have the same name regardless of whether they are dried or fresh. This pepper is often ground to a powder and sprinkled on fresh fruit or used in Mexican soups and stews such as Pozole.

The cascabel chilli pepper is also known as the rattle chilli due to the loose seeds inside the chilli. It keeps the same name when its fresh and dry (though its most commonly found dried). Its grown in the Coahuila, Durango, Guerrero and Jalisco areas of Mexico and is often used in salsa, soups and stews.

Not to be confused with the Pasilla Oaxaca, the Pasilla is the dried form of the chilaca chilli. Pasilla translates to mean ‘little raisin’. It has a rich flavour and a mild to medium heat rating (4000 scoville units). In Mexican cooking its often used in sauces that are served with duck, lamb or seafood.

A close cousin of the ancho chilli, this Mexican chilli pepper is pretty unique in that it retains the same name in both its fresh and dry forms. It has a mild heat (2,500 scoville units) and a rich deep flavour with hints of chocolate. Its traditionally used in Mole, sauces, and stews.

Maybe Mexico’s most famous chilli pepper, the chipotle chilli is a smoked jalapeńo. There are two varieties of the chipotle chilli, the Morita (a very spicy variety from the northern Chihuahua region) and the meco (a milder variety from central & south Mexico). The chipotle is a medium heat (5k scoville units) and has an earthy and smoky flavour which lends itself very well to cooking. Most commonly sold as a chipotle paste or chipotle flakes and often found in chipotle salsa. For inspiration on dishes, be sure to check out our blog on Chipotle Paste Recipes, and on our webshop we now have a Chipotle Is My Life Bundle Box!

Also known as pico de pajaro (bird’s beak) or cola de rata (rat’s tail), the arbol chilli is another chilli that has the same name dried as well as fresh. Originally from the states of Oaxaca and Jalisco, the arbol chilli has a sharp and distinctive flavour. With an average scoville rating of 25,0000 units, this Mexican chilli pepper is hot hot hot!

So there you have it. No more excuses. There’s a lot more to dried Mexican chillies than the generic chilli flakes or powder you often see in jars. Why not get hold of a few different types and start experimenting! Keep up posted on how you get on in the kitchen with all things chilli, and don’t forget to tag us #granluchito. Feel free to post your comments in the comments section below!

For further blogs similar to this please see: