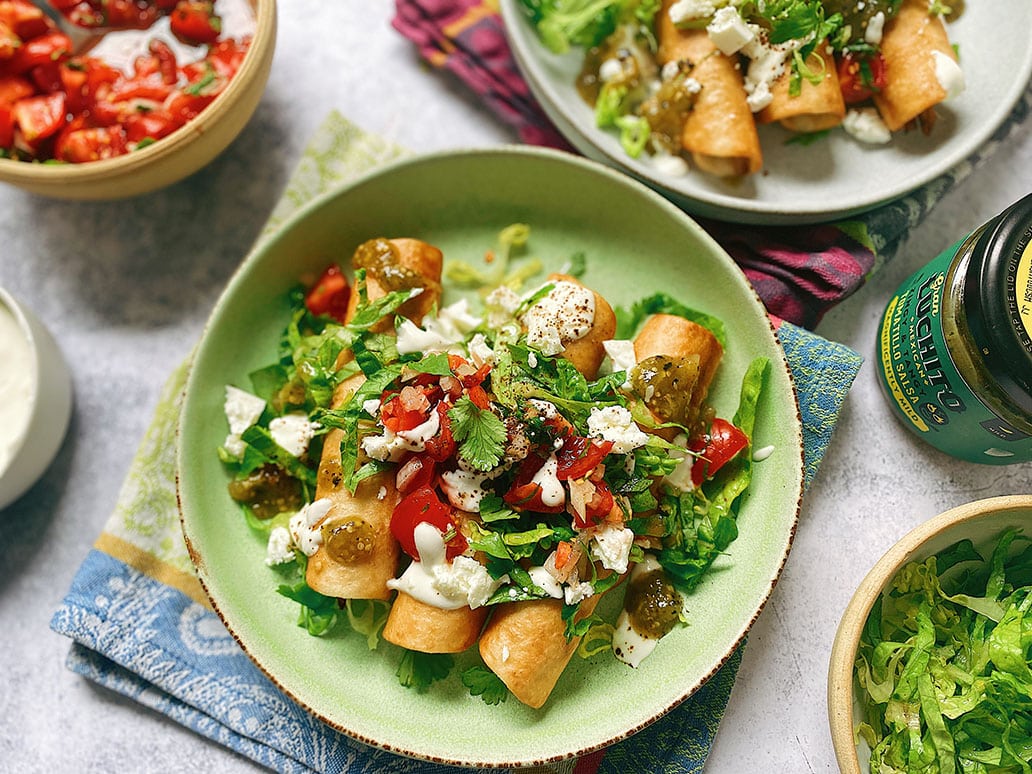 A sure-fire way to get the party started is to whip up a batch of our easy Chicken Taquitos to pass around! It’s the perfect way to welcome guests into your home. A freshly made platter of this homemade taquitos recipe alongside some margaritas or a couple of chilled beers is the bees knees.

But what you ask is a taquito? Crispy taquitos are delicious rolled tacos usually filled with shredded meat, shallow fried until crispy and garnished with shredded lettuce, salsa and sour cream.

For our chicken taquitos recipe, you can either use poached chicken that you can prepare at home, or to save time you can also use a rotisserie chicken. Shred the meat and then cook briefly with fried onions and add Gran Luchito Smoky Chipotle Fajita & Taco Mix to boost the flavour even more.

What To Serve With Chicken Taquitos

Where did taquitos originate?

A taquito, is a Spanish word for small taco. Two Southern California restaurants are often given credit for their roles in the early development of the taquito. Cielito Lindo in LA, and El Indio Mexican Restaurant in San Diego. The latter began selling taquitos during World War II, when tortilla factory owner Ralph Pesqueria, was asked by workers across the street for a portable lunch option. Pesqueria, who used a recipe developed by his Mexican grandmother, has claimed credit for introducing the word taquito for the dish.

How do you keep taquitos crispy?

To keep the chicken taquitos warm and crispy until you're ready to serve, place them, in a single layer if possible, on a wire rack which in turn is placed on a baking sheet, and keep in a warm oven.

How do you reheat frozen taquitos?

To freeze, place cooked taquitos on a parchment-lined sheet pan and place the pan in the freezer. Once frozen, remove and place taquitos in a freezer bag for storage. To reheat, bake from frozen for 20-25 minutes in a 425°F oven.