Now here is a nice variation on those fajitas, burritos and enchiladas we’ve been talking about. Enter into Taco Land and get lost in all of it’s history and glory in our What Are Tacos? blog! 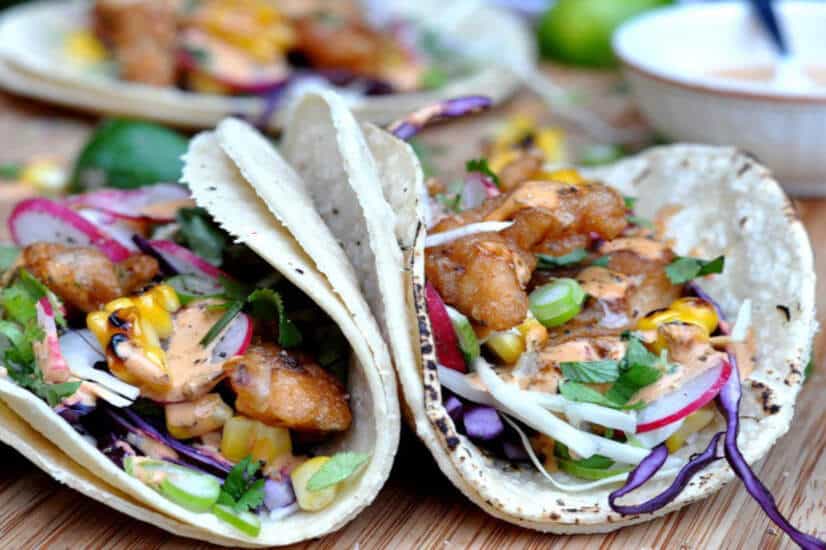 They are a traditional Mexican dish consisting of a small hand-sized corn or wheat tortilla topped with a filling, then folded and eaten by hand. Sometimes people get confused between fajitas and tacos. Fajitas are strips of cooked meat with onions and peppers rolled up in a flour tortilla. Tacos contain shredded, grilled or ground meat, with cold veggies added, in a hard or soft tortilla shell. The tortilla is simply folded in half, not wrapped around the filling.

The traditional, main ingredients needed are either a hard corn one (a ‘shell’) or soft flour tortilla, a meat filling, and a variety of toppings.

The most important part! Without this it just doesn’t work. Our soft flour tortillas are perfect to use.

Anything goes here. Pork, beef, chicken, salmon, prawns, the list goes on. As mentioned earlier, the meat can also be ground, grilled, shredded or slow cooked. If you are vegetarian, you can substitute meat with beans, avocado, halloumi, mushrooms or sweet potato to name a few.

A sauce enhances the flavour of the meat, and adds interest. A hot Mango Salsa, a mild Tomatillo Salsa, or a smokey Chipotle Salsa, would all be delicious added on top.

Where Did Tacos Originate? There is some controversy over the origins of the word “taco.” We do know that it predates the arrival of the Spanish in Mexico. There is evidence that the Mayan people living in the lake region of the Valley of Mexico traditionally ate them filled with small fish. In addition, Jeffrey Pilcher (a taco expert) claims the word originated from the silver mines in Mexico around the 18th century. Apparently they referred to the paper inside little explosives that the workers used to extract the ore within the mines. Tacos were introduced to the United States in 1905, when Mexican migrants came to work on railroads and started bringing delicious food with them. They were essentially a street food at this time since they were highly portable and cheap. After that, Mexican Americans in the Southwest reinvented it, and mass-marketed it to Anglo palates via the crunchy Taco Bell shell.

What Are Tacos? Hopefully now you know! For more on them please visit: How To Make Tacos, What To Serve With Tacos, and Top 10 Taco Recipes